Give details and pictures of your ACVW projects here.
Post Reply
39 posts

I also went through this with my front brake conversion. I bought some Golf’ie front brake callipers at a scrapyard. Bought new seals etc and used the anti-rattle clips that came with the callipers. I would not have known what to do with the rattle clips if it wasn’t for the 2nd hand callipers.

Installed a 17mm twin circuit beetle master cylinder and the feel is ok, but can be better.

Another option to improve breaking performance is to install PowerBrake discs and the brake pads they sells. I have this on my bakkie and it has saved my behind a number of times.

Applying some ATE plastilube on the contact points between the calliper, piston and brake pad also helps reduce NVH levels.

Bought this at a car spares shop in Pretoria. 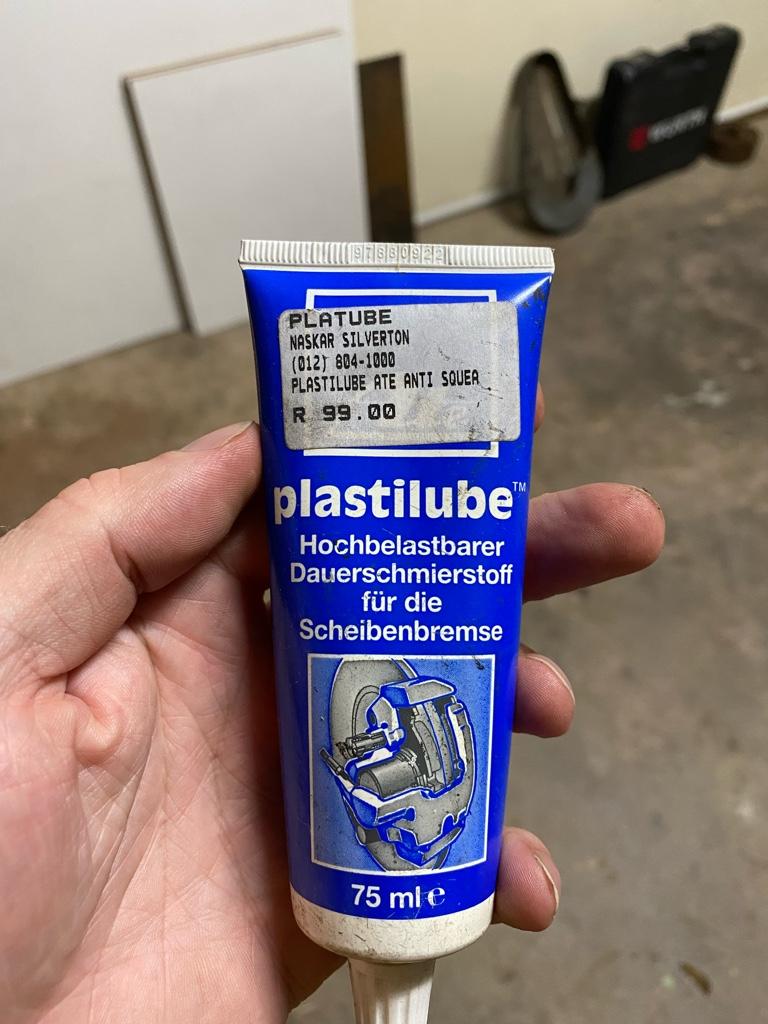 
Totally agree with you Tony, the on;y thing is i will have longer between setting up my back shoe's

An the Hahn is extra light....

Have a problem now to move the chassis around as we have no wheels up front.

Will probably get threaded rod and use my old rusty trailer wheels I replaced some time ago.

But as they do not have the caliper offset, we will have to fit spacers and build out the wheel to clear.

This will not be a problem as we not going driving like that its only to enable the 3 of use to push it around.

Then we fitted the Kombi MC and routed the pipes to join.

Next was the gear lever and bushes that had to be replaced.

Opened the front slot to remove the rod from the pan,

Rod was removed and de-rusted, lubed , and the bush was inserted with lot of grease.

The rod went back with ease, and the coupling up of gearbox was done.

Straitened out the gear lever a bit as the PO had it bent 90Deg. this crashed with the handbrake so he bent this too.

This can be seen on the 1st and 2nd photo's below.

After repairing the hand brake, and gear lever they where both refitted and the gear lever got a short shift kit fitted

Nice to have working hand brake and gear lever

Next we had to de-rust the peddle assemble and make up lost or broken parts.

Fitted the clutch cable to the assembly and installed it making new holes in the pan for the peddle stop and mount brackets.

Why do you guys want to fit the engine I hear a soft voice ask....

Well you have to wait till next time to find out

Have made a plan to get the chassis moving,

and then fitted my old rusty trailer wheels that I had lying around, waiting to be refurbish.

Saved me getting Golf wheels which would have been obsolete in a few weeks anyway.

The easiest is to get hold of Gavin at Volkspares and order the full and complete kit from him,

He will also send you new Flexible brake hoses for your disk brakes,

You will get the conversion Golf 1 bracket, the hub and the bearings with seal, you even get the grease.

Then you get the Golf 2 Ventilated disks and calipers as well as the disk pads with chatter plates.

Well worth the price and the effort as collecting the parts and reworking them is just not a cheap option.

This week we managed to fit the motor to the Chassis after fitting the new clutch plate and pressure plate,

also fitted the new thrust bearing as the old one had sand in it.

Then we hooked it up to the car and "A" framed it to my local car wash.

You had to see the traffic cops look when the chassis came flying past him, .....

Back in the workshop we drained the engine of all fluids and replaced one of the oil drain cover screws with a Temp. Probe.

This we did by removing the old plate and fitting a new CB performance plated and drain plug.

We then removed a stud and drilled out the hole to 8.8mm and tapped it 1/8 BSP

Added sealer and turned in the Temp. probe, so now we read the oil temp just before its drawn into the pick-up

we then filled engine and gear box with fresh oil.

Did the gearbox at the same time.

Installed the starter and the tins as well as the "J" pipes.

Then we noticed that we did not have any sled plates, the ones under the barrels to guide hot air out the back

Made a CAD templet and cut and bent some Galv. plate, worked out great.

You may have noticed my new lead light, got tired of the old toppie lead light that I had all these years it gave very little light.

So now we have a swivel LED flood to help this old man see.....

Well now we wait for the Tip 2 GT exhaust and once fitted, we can get this chassis under the body and start the assembly.

OK so we pulled finger and got the engine to fire .

This we had to do so we can get to the next stage,

So for the ones that say seeing is believing here goes ......