So, first of all, I would like to thank Fig for posting pictures of all those colour charts in another thread a few years ago, and also to Gerhard Ryksen for making them available for us. I have been using them on numerous occasions to determine original colours on local assembled VW's. viewtopic.php?f=89&t=36641

On these charts, it seems, that VWSA only started matching the name of a specific colour to its code from 1967 onwards and at which point they also started using numbers ( "00" being White Sand etc). I've also noticed that they only started giving the interior trim code on VIN plates from 1971 onwards. They didn't do this on earlier cars, so determining your original upholstery on 1970 and earlier cars is near impossible (unless there was some other way of identifying it that I'm not aware of?). The other dilemma is that the 1966 and earlier charts gives you the name of the colour, but not the codes associated with it. These earlier colours were also still determined by letters stamped on the VIN plate. And as Fig also mentioned, it would seem that these unique set of codes were used mainly from 1960 to 1966. Could be earlier than 1960, but that is still to be determined...

I've been looking into these earlier colour codes and have already been able to identify a few. I'll try and open a new thread for each year as I match certain colours to codes. Hopefully we can continue to build on this and help people identify the colours on earlier cars.
There were two codes which seem to be constant throughout these earlier years. I'll mention this at the beginning of each year thread. They were:
- White Sand which had the letter "F" stamped on the VIN plate.
- Red was identified by the letter "R", irrespective of what name they gave red for each year.

Anyway, in this thread I'm going to start with 1964. This colour I'm showing here was called "Tugela Green" and had a " T " stamped on the VIN plate. This was a colour only available in 1964 from what I can tell. Haven't seen this colour (or the code) on any other year models. Please refer to the attached pic. This Beetle was seen at Ferdi's swopmeet in 2018. The front indicators on this 64 is not correct for the year and it also seems to be restored, but otherwise an original car and gives you a good idea of what Tugela Green looked like. Personally one of my favourite colours. 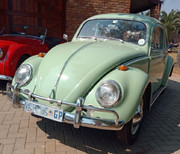